Are Women Less Corrupt Than Men? 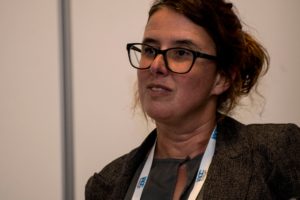 Professor Monica Bauhr, associate professor at the Department of Political Science in the University of Gothenburg.
(Photo Credit: Maurice Oniango)

Despite the efforts of movements fighting for gender equality around the world, the presence of women as political leaders is still not significant. The decisive positions of power in governments and companies are still largely held by men. Therefore, it may be too early to demonstrate a link between female participation in political life and less corruption.

At the International Anti-Corruption Conference in Copenhagen on Tuesday, experts discussed the influence of politically active women and how their participation affects anti-corruption efforts.

The overarching question was posed: Do women play a different role in the fight against corruption? The answer is: maybe.

Justin Esarey, associate professor of the department of political science at Rice University, insists that the causal connection prevails only when the price of getting caught is high.

Some studies suggest that women are more honest and transparent in their professional lives because, historically, they have been vulnerable. Monica Bauhr, an associate professor at the Department of Political Science at the University of Gothenburg, believes women in governments are less corrupt. She gave examples, such as how women tend to be less risk-averse and corrupt groups formed by men are closed off to female participation.

Additional studies from Rice University suggest that the context where corruption takes place matters. In democratic societies, even women in leadership positions are involved in corruption scandals. For example, in Brazil, President Dilma Rousseff, the first woman to govern the country, suffered impeachment in 2016 over accusations of administrative impropriety and omission in cases of corruption.

Discussing the potential benefits of women’s political empowerment and the role of women in the known “game of corruption” is urgent.