“I’m always worried about being arrested,” said environmental defender Lim Kimsor, carrying a resilient smile. “But I’m not afraid. I’m worried that if they arrest me, who will do the work outside jail?”

For the 30-year old Cambodian activist, an arrest is a very real possibility. Several of her colleagues have already been thrown in prison for their work, being released only after months in overcrowded cells in the one-party state.

Aware of the risks, not many people were willing to become active, Kimsor said.

She started her environmental activism in cooperation with Non-Governmental Organisation (NGO) Mother Nature Cambodia in 2013, before joining them as staff volunteer in 2017. A team of under ten people in Cambodia, Mother Nature is one of the most well-recognised grassroots movements in the country that fights to stop the destruction of natural resources.

Following intimidation of civil society and harassment of two of the co-founders of the organization, Prum Thomacheat and fellow monk Sok Chantra, the Mother Nature team asked to be struck from the NGO registration list and was officially dissolved in August 2017. Despite this, the members continue to document companies’ illegal activities.

Mother Nature received international attention when they exposed massive corruption in the sand dredging sector. After uncovering that Cambodian sand export records did not match Singaporean import records, Mother Nature launched a campaign that resulted in the banning of construction and mud sand exports from Koh Kong, a province in western Cambodia notorious for sand dredging, in 2016.

“When they dredge sand, the natural resources under the water are destroyed. For example fish, crabs and everything in the sea, [the villagers] cannot find them anymore,” Kimsor explained. This means that locals are not able to make a living off fishing anymore. Some of them are forced to leave their villages in search of a new way to make ends meet.

According to the activists, sand dredging continues despite the ban – albeit on a smaller scale. Kimsor says she and other volunteers went to a site in Koh Kong province in November after being alerted by the community that a company was dredging illegally. When the activists came back to the scene two days later, the equipment had disappeared. “They had moved to another location,” she said.
Kimsor believes the sand dredgers will likely never have seen consequences for their illegal activities. “Some companies are illegal and pay money to the ‘power people’… to protect their business. It’s corruption,” she said.

Mother Nature co-founder Alejandro Gonzalez-Davidson said in an email that corruption reached all levels of the government. “People in charge of key state organs engage, needless to say with total impunity, in grand corruption to amass vast fortunes. This is done not just [by] the odd rotten apple in a basket, but the whole basket,” he said. Sand dredging, he said, was a prime example for this: the relevant ministries were aware of the fatal impact on the environment, but did not intervene. Instead of stopping the destruction of environmental resources, he said, the ministries protected the companies. “Could any of this be possible without systematic corruption?” he asked. “Impossible.”

And while local communities only earned small wages when working for the companies, the latter enriched themselves on the exploitation of the resources, Kimsor said. She estimates that a company could dredge about 100 tonnes of sand in one day.

Meanwhile, those who uncover those illegal activities might face severe personal consequences. “They never protect us, but they protect the company,” Kimsor said of local authorities. Companies paid local authorities, she said, not only to tolerate their acts but to stand guard at their locations – even when they were illegal.

Kimsor herself, after releasing a video calling on Cambodians living abroad to protest to ask the European Parliament to put pressure on Cambodia’s Prime Minister Hun Sen, received arrest threats.

San Mala, a former Mother Nature activist, is one of the environmental defenders who has been arrested for his activism. During Transparency International’s Anti-Corruption Conference IACC in October this year, he told the audience about his experience. 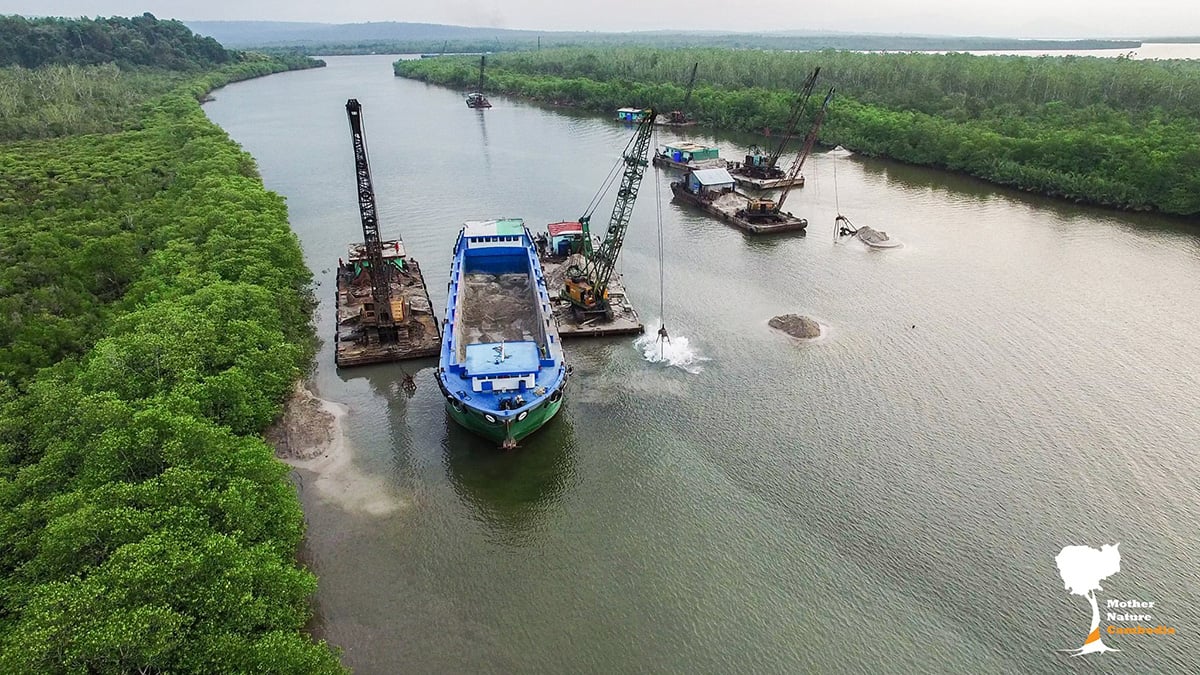 After a successful grassroots campaign to stop one company from dredging sand in the area, the activists, including Mala, turned to a second company in 2016. This company, however, was connected to a high-ranking government official, he said, who “felt really angry with our local activism.”

Shortly after, the activists saw themselves behind bars. “We were arrested and sent to prison, and were detained for 10 months and 15 days,” he recalled. After being released, he said, they changed their strategy and started investigating sand export statistics – which, in turn, led to the banning of sand dredging in the region.

“So this is our success story,” he said.

But the arrests of activists, said Mother Nature co-founder Gonzalez-Davidson, had profound impacts on the work of the organisation.

“Seeing your own beloved friends in those conditions, despite no wrongdoing on their part, negatively affect your own work. Others that are have not been jailed also start thinking, ‘will I be next’? ‘Will my family see me in that stage’? ‘Will I ever be able to find a job after this’? Fear and paranoia start creeping in, and some of the work (i.e., peaceful protests, talking on videos, etc.) automatically decreases.”

Meanwhile, the arrest of Mother Nature activists Doem Kundy and Hun Vannak showed almost opposite effects. While Kundy dropped out of the activism after being released in February and turned to photography, Vannak works even harder than before, said Kimsor. “He said he’s very hurt about having been arrested, and he wants to empower the young generation. He wants to make it simple for other people to get up and fight like him.”