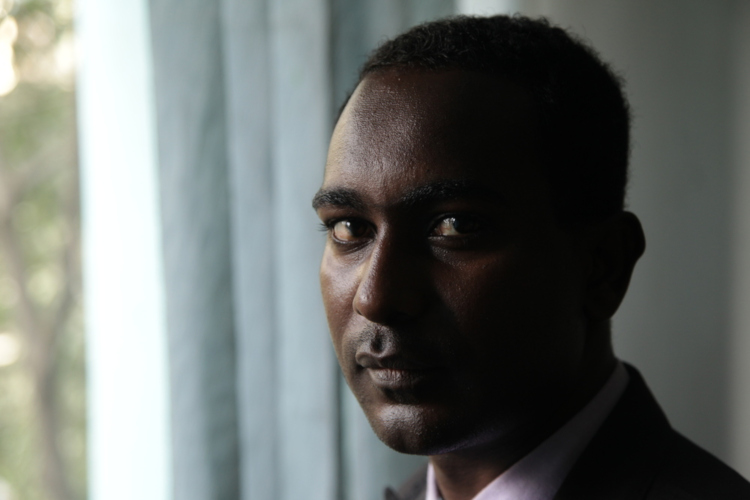 Abdalle Mumin, a Somali journalist who reports on his country from exile in Nairobi, Kenya. (Photo Credit: Michael Onyiego)

Veteran Somali journalist Abdalle Mumin mostly reports on his country from exile in Nairobi, Kenya. When he does go home, about once a month, Mumin keeps his head down and his footprint light. He stays in secure camps inside the “green zone,” only travels encircled by private security in trucks with tinted windows, and changes his SIM card frequently. In 2015, while in the capital Mogadishu, Mumin was stalked and shot by unknown gunmen. He had just completed an assignment reporting on the successful U.S. airstrikes on the al-Qaeda cell in Africa, al-Shabab. Even now, four years later, in another country, his family’s safety remains at risk.

But the menace comes not just from al-Shabab. In fact, Mumin says the more recent threats have been via the Somali government. It started in mid-October, on the first anniversary of the nation’s biggest terrorist attack, when Mumin shared a Facebook post that reported a negative interaction between a government official and former soldier at a memorial event. Since then, Mumin says he has been the target of online harassment from people who say they’re from the Prime Minister’s office. One Facebook message to him reads: “You cannot talk about the Prime Minister’s issues while we know you live in Kenya with your children.” He has received more explicit threatening communique as recently as December last year, saying he’ll be shot and killed.

Intimidation of Journalists Through a “Bribe and Threat” Policy

In Somalia, reporters face intimidation both from armed non-state actors like al-Shabab, and, increasingly from the federal government, led by President Mohamed Abdullahi Mohamed (better known as Farmajo). Journalists and activists say the Farmajo administration uses al-Shabab as a scapegoat while politicians and other influential people pay private guns-for-hire to suppress what they believe needs to stay hidden. Munim says he has not faced had any threats from al-Shabab since 2017. In a complex climate where anyone could be the killer, perpetrators go free, but facts stay bound.

Somalia’s government has never done much to protect journalists. Since the Committee to Protect Journalists (CPJ) started keeping track in 1992, 66 reporters have been killed, and Somalia ranks first on the Impunity Index, which tracks the number of unsolved murders of journalists per year. CPJ has seven additional open investigations of dead journalists but has not confirmed if their deaths are directly related to their reporting.

Recently, it’s gotten worse, to the point that Mumin and London-based Somali journalist Jamal Osman say that more than the spectre of al-Shabab, journalist’s safety – and integrity – is compromised by a “bribe and threat” policy that’s evolved from the relationship between the government, the business community, and the media. While working in the media in Somalia has always been politically charged, and potentially corrupt and deadly, the “bribe and threat” policy have been made systematic, they say, by the current administration.

The Ministry of Information did not respond to three requests for comment on this matter. The President’s Office also did not reply.

“The biggest threat to press freedom in Somalia is not al-Shabab – it’s Farmajo’s regime,” said Osman. “The militants don’t control big cities, they have resigned to the negative media coverage against them and they have bigger battles to fight. But Farmajo’s regime is very sensitive and insecure.” Osman also accuses the government of putting journalists on “salaries.” If journalists feel their lives are in danger, the press cannot be free, Munim surmises.

Secretary General of the Somali journalists union, Mohamed Moalimuu, also makes allegations about  a “bribe and threat” policy. Speaking out against government intimidation of journalists at a press conference in November last year, Moalimuu accused the Prime Minister’s office of putting some reporters on the payroll to keep them permanently biased. “There are two ways in which the government is now working to deal with journalists,” said Moalimuu at the event. “One is to censor them while the other is by bribing journalists and media houses.” Within that month alone, Moalimuu said at the event, one journalist was threatened, another arrested, and a third shot by a police officer.

According to Osman, the “bribe and threat” policy is what it sounds like: government officials or members of the business community will bribe journalists to publish – or not publish – certain pieces. “Politicians will give a journalist $200 (€175) to interview them,” he said. “[They’ll say] ‘put this message in,’ then the journalist goes back to [the] office with the money and story.”

Speaking of the bribe and threat system, Mumin said: “This continuously suppresses the work of fellow journalists in the country who have unfortunately now resorted to self-censorship. Online harassment, intimidation against individual journalists are on the rise.” But that’s the least of it, according to Munim who also said: “Fake news produced by people associated with top government officials in the disguise of nationalism and corrupt culture to weaken the credibility of journalists have become daily occurrences.”

The Role of the Media in “the Most Corrupt Country”

Somalia was ranked last out of the 180 countries included in Transparency International’s latest Corruption Perceptions Index which draws on surveys and expert assessments to measure public sector corruption. Each country is given a score from zero (highly corrupt) to 100 (very clean), with Somalia scoring the lowest for the 11th year running.

Dr. Idil Osman, an academic in global media and communications who specialises in Somalia, posits that the government has made notable progress and that perhaps, counterintuitively, that triggers a unique sensitivity to criticism or negative coverage. “The current regime has made improvements in key government areas such as the economy, constituting the National Development Plan, advocating for debt relief and consolidation of different humanitarian efforts. This in comparison to previous governments seems like much positive progress has been made and so, the government perhaps expects to be lauded for this,” she commented.

Jamal Osman says that it’s not just politicians and business people, but also his colleagues who are to blame: media workers will also take advantage of the environment, offering positive coverage, or warning of a tarnished reputation is if a fee is not paid. “Somali politicians are also victims of blackmailing,” he explained. “Journalists will threaten and say if you don’t do so-and-so I’ll threaten that you slept with a young girl,” he offered as an example. Osman thinks the lack of resources fuels the problem on all sides.

Fatal corruption combined with fear of retribution from Africa’s most effective terrorist group makes for a climate where speaking the truth is an act of life-risking defiance. Still, people like Osman, Moalimuu and Mumin persist. Mumin is a firm believer in press freedom. “I believe free and fearless journalism is important for a country like Somalia,” he wrote in an email. “It is a right enshrined in the country’s constitution and no government should ever try to take away these basic rights from the Somali people.”

In Ghana, Technology Partners with Citizens and Media to Fight Corruption